Back in 2013 I wasn’t even aware of the Disneyland Ambassadors program, however, I’m extremely glad that it exists. The program started at the 10th Anniversary of Disneyland when Walt Disney selected Julie Reihm as the first Ambassador. Some of the duties to the title include serving as official hosts to guests of the Disneyland Resort and “Emissaries of Goodwill.”

As with many lines during these events, guests scurry along as they take a quick photo, maybe get an autograph and  go on to the next person or event. That day, my heart was pounding because it was the first chance that I had to meet the Disney Legends. As the line hurried along I was getting nervous not knowing how long I would have to speak with them or even what I would say if I got the chance. It was now my turn and I handed my camera over to Jonathan and nervously handed my phone to Megan (I’m still not exactly sure why). 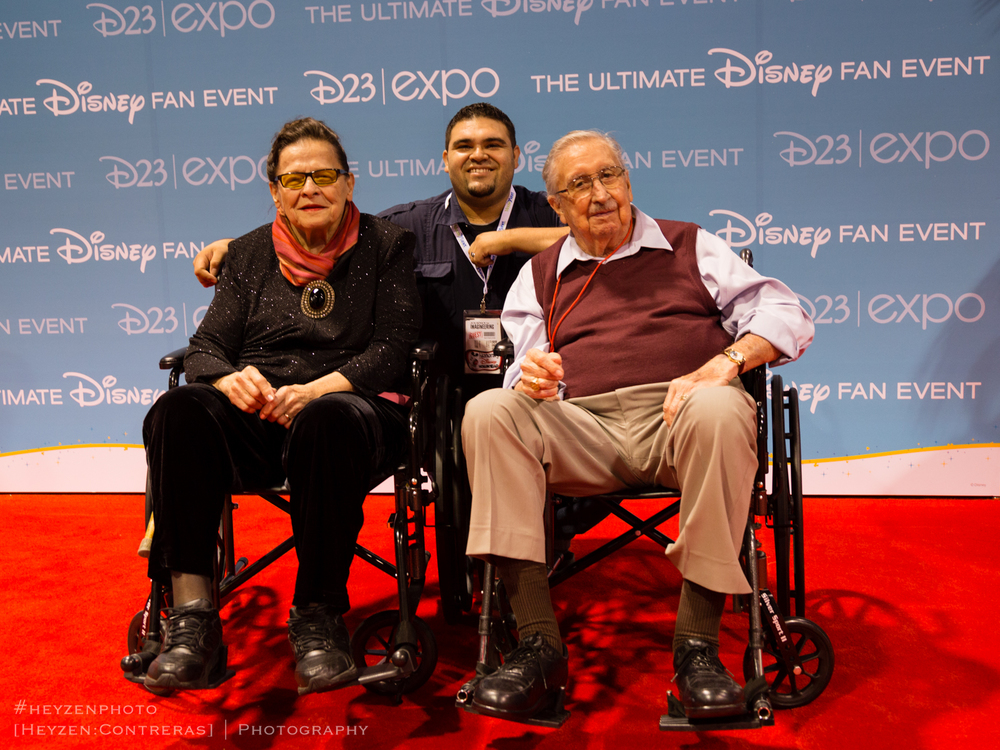 After taking my photo I surprisingly got a chance to speak with Alice and X and as many fans do I told them that I admired their work and how much they were an inspiration to me. I even had a chance to tell Alice how much her husband’s (Disney Legend, Marc Davis) contribution to the Disney company has also been an inspiration for me. I told them that I hope to one day be a part of something that inspires and touches people’s hearts the way that they had with ours. Our brief conversation ended with a low voice that said to me with a smile, “Just do what you love”. I smiled, turned away, picked up my camera, thanked Jonathan and Megan and continued with the Expo. As I looked through the photos on my phone I saw that Megan had taken a photo of me speaking with Alice and X. 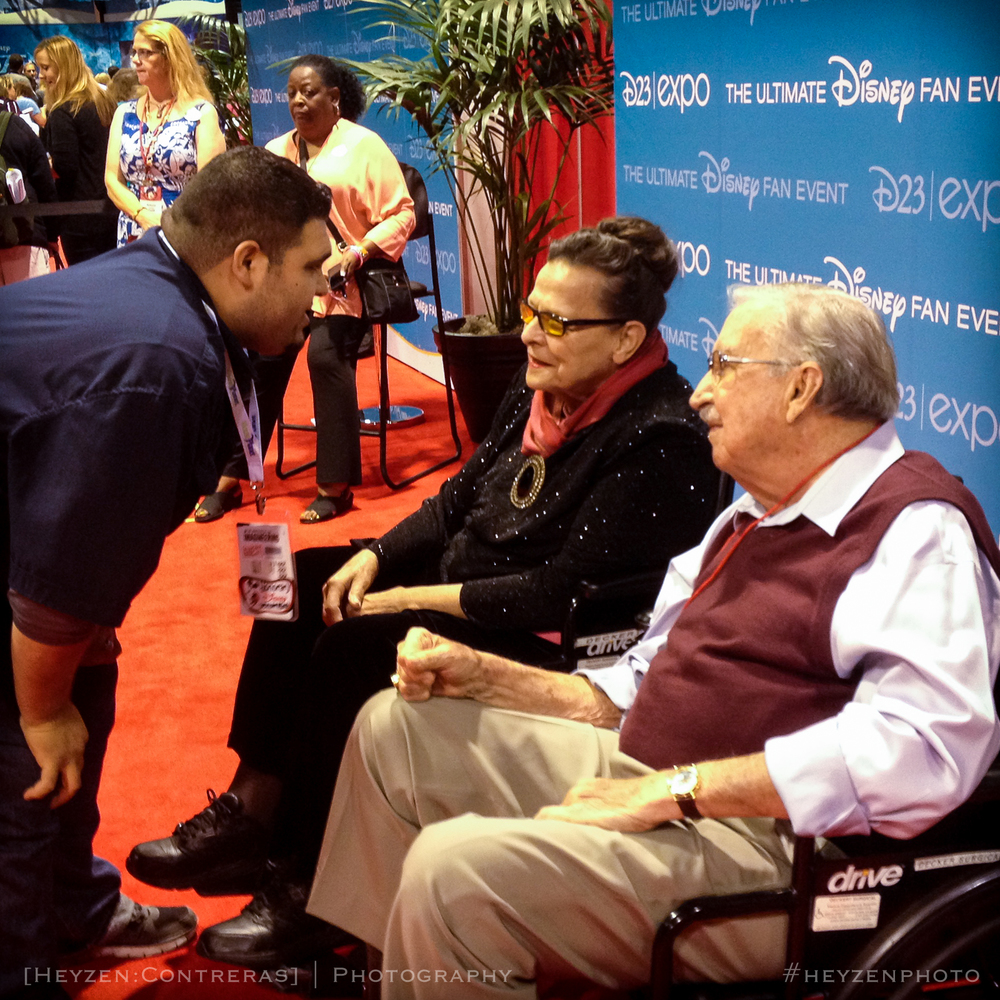 I thought it was a so cool! Even when I wrote my blog post about the event I simply called it a “highlight” which thinking back was such an understatement. As months passed I had a lot of time to think back on that brief but meaningful conversation with X and Alice and how much that photo meant to me. It was especially important because the conversation came as I was taking my photography in a much more professional direction.

At the same D23 Expo, Tony Baxter was honored with the Walt Disney Company’s highest honor, Disney Legend, and in January of 2014 I had the opportunity to attend his window dedication ceremony on Main St at Disneyland.  At the event I saw Megan and I attempted to gather my thoughts and thank her for the photo but with everything going on I seem to recall my words being an incoherent mess. I’m sure I said thank you but I’m not exactly sure what else I said and I wasn’t content.

This past weekend I attended a book signing at Disneyland for Marc Davis’ new book Walt Disney’s Renaissance Man where I once again had a chance to see Alice Davis. As expected, my time was limited as fans lined up to get their books signed by her and the other artists. It’s funny because even though I had already met Alice and even Marty Sklar, I was still a bit nervous and was still trying to soak it all in. The Disney Ambassadors, Megan and Sachi, were both in attendance and seeing as how their tenure as Ambassadors is coming to an end and not knowing if I would ever get a chance to see her again, I figured I needed to take this opportunity to properly thank Megan. I walked over to her and started by saying that I needed to thank her for the photo that she took of me at D23 and I showed her the photo. As the words came to my head they failed to transition to my mouth and instead I could feel my eyes tearing up. I stopped to take a breath and tried again. I finally managed to get enough words out to begin to tell her how much the photo meant to me.

There are moments in our lives that can trigger a turning point or symbolize the direction that you want to go. That moment at D23 was one of those moments for me. Although it isn’t something that we’re always afforded and as cliché as the phrase might seem, the words “just do what you love” left a lasting impression on me. Alice and X didn’t know that I wanted to focus on my photography nor did they need to, all they knew is that they loved what they did and they had fun doing it. That was their message to me. Truth be told I don’t know if those words would have had such an impact on me if the conversation hadn’t been chronicled but because it was I had a chance to look back on it and really have the moment sink in. Although she was just doing her part as an Ambassador for the company that many of us love, that was the difference that Megan made in my life. I believe that I got enough across to her this past weekend that she understood how profound that moment was for me and how much I sincerely appreciated what she had done. I hope one day I can do the same for someone else.

Thanks for taking the time to read this. Was there ever a time in your life that you felt was one of those “defining moments?” Leave a comment down below, I’d love to hear about it.  If you have any friends or family that you know might be able to relate, please share this post with them, I’d to also hear their thoughts. 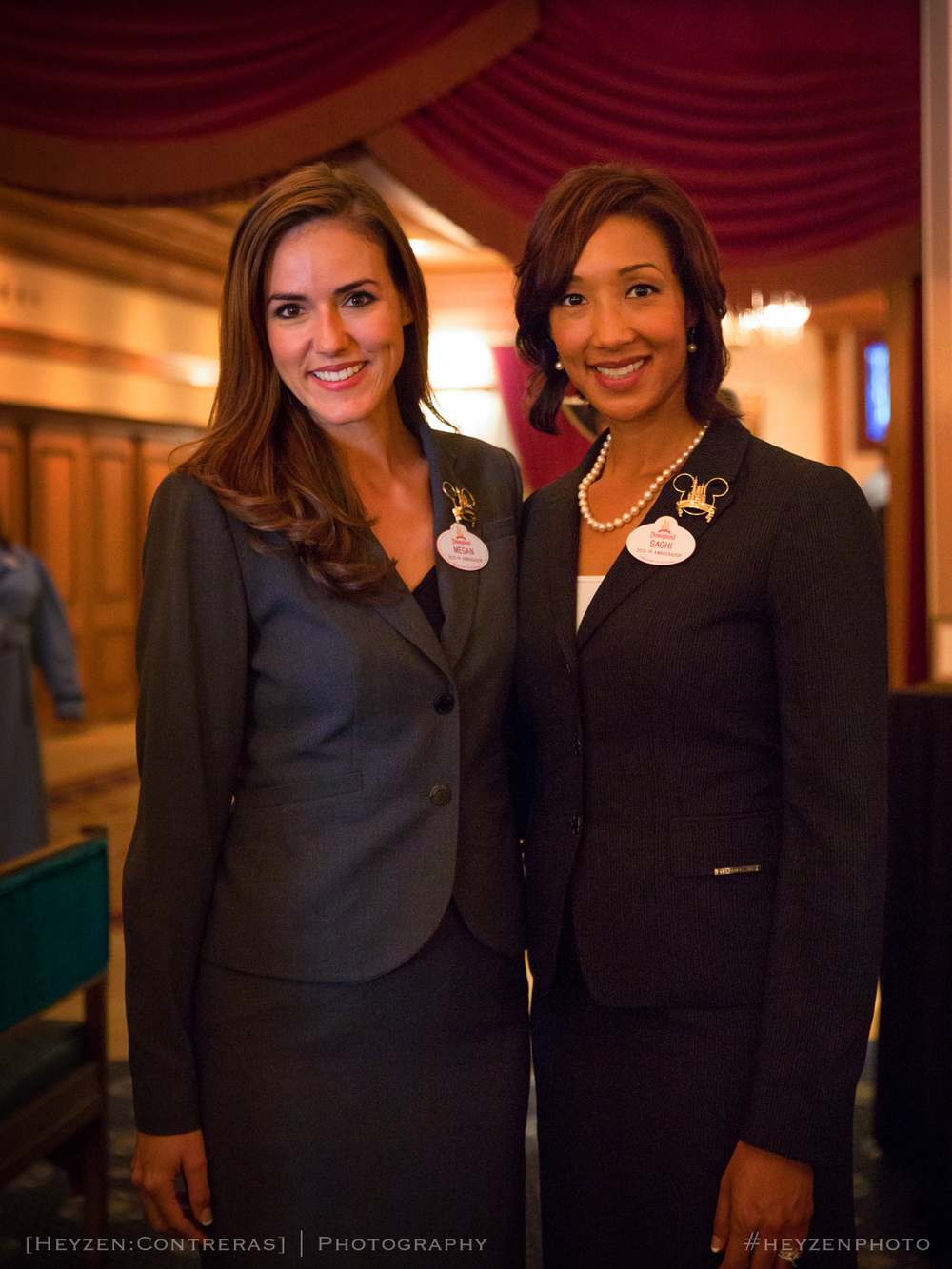 Feel free to save these for yourself and share them! I only ask that you do not remove my watermark and that you don't alter the photos in anyway (i.e. adding filters, etc) when posting.